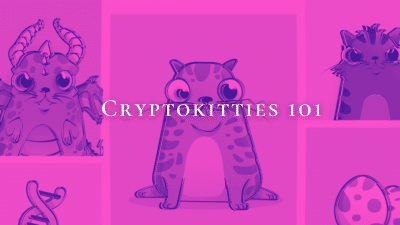 CryptoKitties is a Non-Fungible Token-based (NFT) game that allows users to collect, trade, and breed digital cats together to produce a variety of new cats. It is widely regarded as the first project to bridge the otherwise “too techy” world of NFTs with a mainstream audience.

If this guide is among your first exposure to the world of blockchain-based digital collectibles, think of CryptoKitties as a hybrid between NeoPets and Pokemon, where each creature has a real-world value on a live market.

The technology underpinning CryptoKitties, the blockchain, essentially acts as a replacement for a centralized “authenticity verification and escrow” department that accompanies most collectible auctions and marketplaces, such as eBay.

The following guide will explore CryptoKitties as an NFT pioneer, how the game functioned, and critical lessons learned by CryptoKitties that have benefited the entire world of NFT creators.

The Origin of CryptoKitties

CryptoKitties was launched in late 2017 at an Ethereum-oriented hackathon, ETH Waterloo by Axiom Zen, the creator of CryptoKitties’ creator, the consumer-focused Flow-blockchain Dapper Labs. The primitive game was built on-chain on Ethereum (a decision that proved to be chaotic for both parties).

CryptoKitties raised a total of $23 million from top-shelf investors like a16z and Union Square Ventures.

The first generation of cats “Generation 0” was auctioned to a small audience in a Dutch auction format, and any new cats could be sold on a secondary market.

As an NFT, each CryptoKitty exists on the blockchain as a unique asset using Ethereum’s ERC-721 non-fungible token standard. The breeding aspect of the game is an on-chain algorithm nestled within a closed-source smart contract that determines the “cattributes” (genetic code of the new cat.) Some cats with certain cattributes are valued more than others, so ensuring the randomness of breeding required an adept level of foresight.

Silly and lovable digital pictures of cats selling for thousands of dollars had palpable value for media outlets thirsty to give a raging audience interested in the perceived absurdity of the cryptocurrency boom what they wanted. As more outlets wrote about CryptoKitties, often lampooning the game as a ridiculous fad, more users poured into the game to see what all the hubbub was about.

As the game became more popular and the demand for CryptoKitties increased, so did the prices– the game was soon engulfed in a speculative mania. At its peak, the game saw roughly 5,000 ETH in volume, accounting for 95% of Ethereum’s network usage.

“Although we wouldn’t have pursued the CryptoKitties project if we didn’t want it to be a success, we did not expect it to catch fire quite like it did,” said Bryce Bladon, Co-Founder of CryptoKitties, in comments to Ethereum dev house ConsenSys. “ And I mean that in the metaphorical and, potentially, the literal sense. […] All signs were great. We thought we’d caught all the bugs and issues. We were expecting to have to deal with things like scaling at some point. We did not expect it to be in the first week.”

The CryptoKitties hype fizzled from the mania, further dampened by a bearish 2018 cryptocurrency market. The average CryptoKitty prices and volume declined– the game has an average volume of 50 ETH per week.

The story of CryptoKitties shares a similar arch as many products that achieve rapid popularity early on: the virality exposed several fundamental issues that would prevent the company from scaling.

Although the crisis was averted, it exposed the reality of how urgent Ethereum’s scalability issues truly were. With the DeFi craze of 2021 and the ensuing exorbitantly high Ethereum gas prices, the network has yet to solve this pain point.

The Dapper Labs team would build its own high-volume blockchain called Flow in early-2020. The Flow blockchain uses a native token, FLOW, to allow validators, users, and developers to participate in the FLOW network and earn rewards.

Leaning on lessons gained in its launch of CrypoKitties, Dapper Labs launched NBA Top Shot in 2020. The project would go onto generate over $205 million in revenue in February 2021, helping usher in a new wave of NFT creators.

CryptoKitties, however, is still an active project with a loyal base of users. The original version is considered less of a “game” than a collection platform and marketplace, but there have been several “layer two” games built by third-party developers. As a permissionless project, CryptoKitties enables unaffiliate developers to build their own applications as layers on top of the public CryptoKittiew smart contracts.

As an early pioneer of blockchain-based digital collectibles, CryptoKitties has served as an inspiration for hundreds, if not thousands of NFT ventures.

The nebulous mainstream opinion of CryptoKitties skewed towards incredulity in 2018, entering crescendo when a CryptoKitty was auctioned off for $140,000. In retrospect, $140,000 seems a paltry sum next to today’s comparables of high-flying auctions of digital art: ranging from an NBA Top Shot of LeBron James dunking for $208,000 to Beeple’s $69 million NFT auction.

The NFT narrative is being written one day at a time, and while the CryptoKitties chapter is far from over, it’s hard to not acknowledge its role in shaping today’s NFT economy and ecosystem.